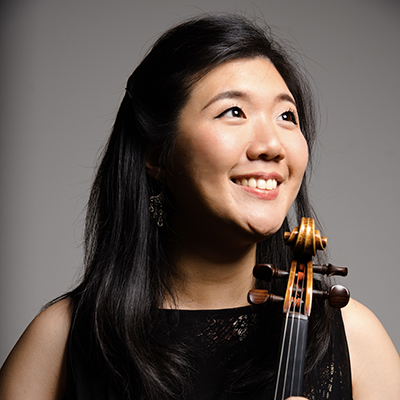 Visanee Vongvirulh is a violinist, orchestra musician, and pedagogue. She won 1st Prize at the 4th Beethoven Competition in Thailand for Young String Players in 2010 and was invited to perform at the Beethovenfest in Bonn, Germany. She also won first place at the International Youth Chamber Music Competition (IYCC), Interlaken, Switzerland 2005 as a member of the Dr. Sax Chamber Orchestra and had concert tours in Germany, Austria, Switzerland, Italy, Canada, and China.

In 2012, Visanee graduated with a bachelor’s degree (First Class Honors) in Music Performance (Violin) from the College of Music, Mahidol University, Thailand, under Prof. Sittichai Pengcharoen and Prof. Inga Causa.

Between the years 2012-2013, she was awarded a 9 Month Classical Music Training Scholarship from ASEA UNINET, and from 2014 to 2021, she received a scholarship from the Royal Thai Government for further studies in Austria. In her second bachelor’s degree, she graduated under Prof. Anita Mitterer and for her master’s degree under Prof. Klara Flieder-Pantillon in Instrument Pedagogy (Violin) at the Mozarteum University, Salzburg.

Apart from becoming a full-time Violin Instructor at the College of Music, Mahidol University, Visanee is also a member of the Thailand Philharmonic Orchestra and gives private violin lessons at her own “Visanee Violin Studio” in Salaya, Nakhon Pathom.