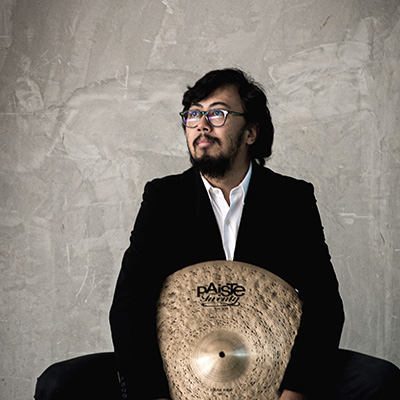 An accomplished clarinetist and jazz drummer, Sarute Wijitwechakarn enjoys a wide range of music, from classical to jazz. He has been offered a scholarship for studying clarinet at the Mozarteum University of Salzburg, Austria in 2000. He has given many clarinet workshops and master classes in music camps such as Southeast Asian Youth Orchestra and Wind Ensemble and Thailand International Wind Ensemble Competition.

​Sarute Wijitwechakarn holds a Master of Arts degree in Music Performance and Pedagogy from the University of Northern Colorado. He teaches drum set and coaches jazz small and large ensembles at the Mahidol University College of Music in Thailand where he earned his Bachelor degree in Jazz Performance. Besides teaching jazz improvisation seminar, jazz composition, major area literature, and jazz style and analysis at a graduate level, Sarute supervises jazz big bands at the Mahidol University and has performed in major jazz events such as Hua Hin Jazz Festivals and Thailand International Jazz Conference as well as many others. On an international note, he had participated in many jazz workshops while attending university in The United States.

Aside from teaching music, Sarute also took part in college administration at Mahidol University. He once served as chair of bachelor degree program as well as chair of the Music Entertainment and music Technology department. He started his teaching profession as early as the age of twenty-three. Considered by many to be one of the best and most sought after drummers in Thai jazz industry, Sarute is also versatile in his style of playing, ranging from classical, popular music to a more complicated jazz rhythm which is his specialty. He recorded four albums and they were released in 2016, 2017 and two in 2020.