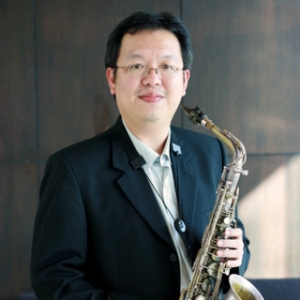 Krit Buranavitayawut received a Bachelor of Architecture degree from Silpakorn University in Bangkok, Thailand. He has been working in both music and architectural fields for many years with his strong belief that every kind of arts is united into one. He joined College of Music, Mahidol University as a full-time faculty member since 1999. His duties include teaching jazz saxophone, jazz theory, jazz pedagogy and coaching jazz combos. Krit ’s other duties include planning and equipping educational music facilities for College of Music, and Bhumibol Sankeet Building construction project management.

As the first-call bebop saxophonist, he has appeared in many jazz festivals and jazz concerts, leads William’s Jazz Band for more than ten years. A member of Mahidol University Jazz Faculty Ensemble, he has recorded the CDs: Music of His Majesty King Bhumibol Adulyadej, Celebrating Jazz concert. He has formed a jazz group named The Pomelo Town, with Darin Pantoomkomol, Noppadol Tirataradol, Teerapoj Plitakul, Chanutr Techatananant, Kom Wongsawat, and the group’s first record, Chasin’ Sangrawee, was released in 2006.

Krit Buranavitayawut was a former member of the Bangkok Saxophone Quartet that has performed and recorded two CDs: Falling Rain,and Plaeng Sib Song Phasa. Guest performing artist with Mr. Monthien Buntun for the contemporary art exhibition “Shape of The Sound Project” at Nasunogahra Harmony Hall, Ohtawara, Japan(1999). He has also performed with The Bangkok Saxophone Quintet at the 2003 World Saxophone Congress XIII in Minneapolis, USA, with Thailand Saxophone Ensemble at the 2006 World Saxophone Congress XIV in Ljubljana, Slovenia. Krit has appeared as a soloist with Thailand Philharmonic Orchestra (TPO), and has recorded the CD: National Music – King’s Composition.

Krit Buranavitayawut is currently the Deputy Director for Administration and Head of Jazz Studies Program at College of Music, Mahidol University, Thailand.