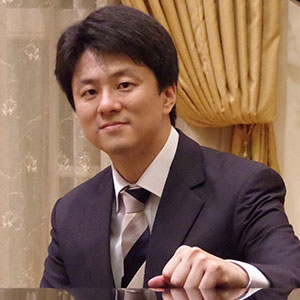 Junta Arakawa is a pianist from Japan.

After he studied International Relations as his major in Nihon University, Mishima Japan for two years, he earned his Bachelor’s Degree in Piano Performance and Business Minor from St. Norbert College, WI, USA in 2003. While studying with Elaine Moss, in 2002, he won the 2nd prize from both Sheboygan Symphony Orchestra Concerto Competition and Lakeshore Wind Ensemble Concerto Competition.

He enrolled in Wichita State University, KS, USA as a full-scholarship Graduate Teaching Assistant, studied with Paul Reed and received his Master’s Degree in Piano Performance in 2006.

He moved to Thailand and became a full-time lecturer at School of Music, Assumption University in 2006, and organized solo and ensemble concerts, a lot of school activities, and performed with many musicians in Thailand and Japan. Throughout performing together, Paulo Zereu became one of his influential pianists. Junta was the chairperson of Department of Music Business, School of Music, Assumption University.

He is currently a piano lecturer of the Young Artist Music Program, College of Music, Mahidol University.