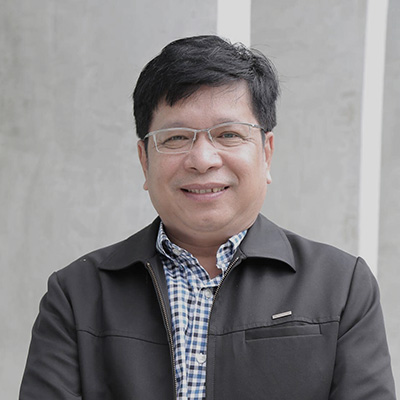 Sanong Klangprasri has worked as a lecturer at the College of Music, Mahidol University since 1994 teaching courses in Thai music, Thai folk music, Southeast Asian Music, and Introduction to Ethnomusicology and Oriental Music

He has performed Thai music and Thai folk music at North Carolina, USA. , Japan, the United Kingdom and The Corfu festival Ionian Concert at Corfu, Greek in 2007. Thai Music Workshop and Music Symposium cooperative project of Mahidol University, Thailand and the Institute für Musikwissenschaft der Hochschule für Musik Franz Liszt Weimar and University of Jena at Weimar, Germany in 2009, He also leader of E-sean Quintet in that received the Telenor Culture Prize at Oslo, Norway in 2013., In 2017 he performed with the E-Sean Quartet in The Festival Young Artist Bayrueth at Germany

He is active in many areas for the College including Editor for regular publications in the Music Journal in which he written more than 30 articles and for newspapers more than 65 articles. He is a radio host for the Parliament Radio Station, Radio station of Thailand. He organizes student internships and practicum in folk music, and advises students on research projects and a judge of Isarn Heritage Artist awards of Khon kaen University.