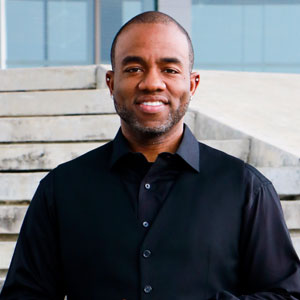 Dr. Michael Robinson, Jr. is originally from Charleston, SC where he attended Burke High School under the direction of Linard McCloud. He has been an active freelance trombonist in Michigan and South Carolina as well as a private low brass instructor in Dorchester District 2, Berkeley, and Charleston Counties.

From 2007-09, he was awarded a 2-year contract as the Detroit Symphony Orchestra Fellow where his duties included playing principal and second trombone, along with community outreach services in the Detroit Metro Area. He has held positions such as acting 2 nd trombone with the Charleston Symphony Orchestra, Saginaw Bay Symphony, Canton Symphony, and Principal with the West Michigan Symphony. Also, he has subbed with the Grand Rapids Symphony, Toledo Symphony, Lansing Symphony, Charleston Symphony, and the Detroit Chamber Winds and Strings. Aside from classical music, he has been in several Broadway pit orchestras at the Fisher Theater in Detroit, the Wharton Center in East Lansing, the Strahan Theatre in Toledo, and the Devos Performance Hall in Grand Rapids. He is also a member of the Variance Brass Quintet with members from his undergraduate studies. As an avid chamber music performer, he is a member of the Variance Brass Quintet, which started a summer brass camp in 2015 in Tucson, AZ. Most recently, he is a founding member of an African-American brass quartet named Pitch. He is currently the Lecturer of Trombone at Mahidol University College of Music, as well as Principal Trombone with the Thailand Philharmonic Orchestra.

His summer festivals include the Aspen Music Festival, Bay View Music Festival, National Repertory Orchestra, and the Spoleto Festival USA. In the summers of 2005 and 2006, he toured Venezuela, Colombia, Argentina, Margarita Island, England, France, Italy, Belgium, and Germany with the Youth Orchestra of the Americas under the baton of Carlos Prieto, the music director of the Louisiana Philharmonic, and Gustavo Dudamel, music director for the Los Angeles Philharmonic. He is the two-time winner of the Tuesday Musical Solo Competition in Akron, Ohio, and he won the concerto competition as a student at Shenandoah University and Michigan State University. In 1998, he was a member of the National Wind Ensemble at Carnegie Hall under the direction of H. Robert Reynolds, Former Music Director at the University of Michigan-Ann Arbor.

Dr. Robinson received his Bachelor of Music Degree from Shenandoah University, Master of Music along with an Artist Diploma from the Cleveland Institute of Music, and his Doctor of Musical Arts degree from Michigan State University where was he was a University Distinguished Fellow. His teachers include Ken Thompkins, Randy Hawes, Steve Witser, Rick Stout, Per Brevig, Chris Matten, and Ava Ordman.