Dr. Boonyarit Kittaweepitak is an active euphonium soloist and a tenured professor of euphonium at the College of Music, Mahidol University, Thailand. Boonyarit is also one of the founder and music director of Mahidol University Brass Band. As a native of Thai, Boonyarit, sought musical experiences including various national and international competitions, solo and ensemble performances, teaching, as well as earning his music degrees, not only in Asia, but also in Europe and Northern America.

In 2020, he graduated with a Doctoral of Musical Arts degree from the University of North Texas under the instruction of Professor David Childs, and Dr. Brian Bowman from whom he took lessons, assisted, and worked alongside as a teaching fellow and Coordinator of UNT’s Tuba Euphonium Ensemble. He received a Master of Music degree from the Royal Northern College of Music in the United Kingdom and a Bachelor of Music degree from Mahidol University where he returned to teach. His primary teachers include Professor Steven Mead, and Kitti Sawetkittikul. Boonyarit began his euphonium studies at Assumption College, Thailand with Wichai Yongvanitjit and Jakkrit Ruenvuth in 1999.

As a soloist, Boonyarit was the first euphonium player who was invited to perform with Thailand Philharmonic Orchestra. He appeared as a soloist with Blackburn and Darwen Brass Band in the UK and the Dallas Brass Band, where he received the Player of the Year award. Also, Boonyarit performed a duet with a euphonium virtuoso, Steven Mead, which was accompanied by the Desford Brass Band in Singapore&#39;s Brass Explosion Festival in 2012. Boonyarit was featured in several ensembles including, WASBE International Youth Wind, UNT Wind Symphony, RNCM Wind Orchestra, RNCM Brass Band, and Manchester University Brass Band.

Boonyarit was invited as a faculty member of Asia Tuba Euphonium Festival, which was held in South Korea (2018) and in Beijing, China (2019). Some of his colligate students have competed and received recognitions among prestigious national and international platforms including International Tube Euphonium Conference (ITEC) and Falcone Festival. Boonyarit devoted himself to teach students of all ages. He taught at several schools in Dallas-Fort Worth area, namely Hebron HS, Frisco HS, Liberty HS, and Independent HS.

Boonyarit is a member of Incite euphonium quartet that were invited to perform at Stephen F. Austin, University of Memphis, University of Alabama, U of A at Birmingham, and ITEC regional at Kennesaw State University and University of Kentucky in 2020. Boonyarit is also a member of fLOW Quartet, the winner of the SCRTEC 2017. fLOW successfully went on a tour in Japan with a number of performances and masterclasses in Tokyo, Hiroshima, Saitama, and Yamaguchi. fLOW quartet has released 4 Dreams: The Quartet of Yuji Ono in January 2019, which is available to download on Spotify and iTunes. Moreover, Boonyarit was also a member of E-Tan Quartet (Thailand). The quartet performed at Sydney International Brass Festival in Australia, as well as Tuba Mania International Festival in Thailand. The quartet was featured at the Gala concert of ITEC 2012 in Austria.

Dr. Boonyarit Kittaweepitak is a Besson performing artist and performs on a Besson Prestige BE2052 Euphonium. 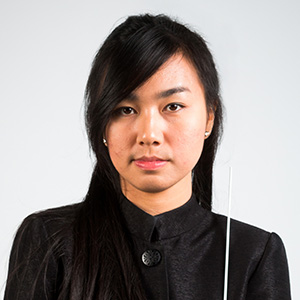 Pamornpan Komolpamorn is currently on a faculty of conducting department at College of Music, Mahidol University, where she works as a conductor of the Mahidol Symphonic Band, Mahidol Concert Band and Thailand Philharmonic Pop Orchestra. She is also the founder, the director, and the conductor of Amass Chamber Ensemble (ACE).

Komolpamorn was participated to the conducting master classes with Dr. Jeannine Wagar and Dr. Dennis Fisher. She was also one of seven invited participants at the 2008 “Tomorrow Musical Leaders”, conducting workshop with Mr. Bundit Ungrangsee. Pamornpan was a guest conductor for the Project Unity Music Camp to conduct the Unity Orchestra with chief conductor, Mr. Bundit Ungrangsee.

Born in 1993 in Bangkok, Thailand, Jaruda received her undergraduate degree in Piano Performance at Silpakorn University under the instruction of Prof.Jamorn Supapol. During her undergraduate, Jaruda was a Teaching assistant for an Aural Training class. She was also selected to play in numerous number of concerts with other universities in Bangkok and coordinated recital programs. She has attended and performed in several masterclasses and private class that include those of Dr.Peter Amstutz, Rebecca Penneys, and Mitra Alice Tham. Upon graduation, Jaruda started her master’s degree at West Virginia University in Piano performance with an emphasis in Piano Pedagogy under Dr.Peter Amstutz and Dr.Lucy Mauro. Jaruda was also an active member of the Music Teachers National Association (MTNA).

Jaruda also participates in Jaques-Dalcroze Teacher Training program at Mahidol University as well as Orff Schulwerk Teacher Education Program at George Mason University level I and II, where she received the scholarship from The Orff Schulwerk Scholarship Panel. Apart from that, she was also an interpreter at 3 days Orff workshop with Donna Fleetwood in Thailand by MMTT.

Starting at the age of 12, Yuttapon Sakthamcharoen began his musical studies as a trombone player at The Price Royal’s College, in Chiang Mai, Thailand. He enjoyed taking part in many music activities with the band until completing his high-school; thereafter he joined Chiang Mai Youth Symphonic Band and performed with them every year for a period of 5 years. He also had the opportunity to perform in one of the most famous musical show “South Pacific” with the orchestra from Australia. Yuttapon Sakthamcharoen got his Bacheler of Music in trombone from Duriyasilp College of Music, Payap University, under the guidance of Somphong Wongdee in Trombone, Ayu Namthep in music theory and voice, and Dr. Sompan Wongdee in Choral conducting and Instruments conducting. Upon his graduation, he joined The Price Royal’s College as a full-time faculty where he led the college’s band to perform in front of the Queen Sirikit and in many more events around Thailand such as Chiang Mai Flower Festival and the 13th Asian Game’s closing ceremony. He has maintained his interests in trombone and later received his Master of Music Performance in trombone under the guidance of Kitti Sawetkittikul, Sukanit Sasomsin and Philip Brink. Yuttapon is a full-time faculty in conducting department at College of Music, Mahidol University. He is a conductor of Young Artist Music Orchestra, Mahidol University.

The second-place winner of the 2013 American Prize in Conducting, Thanapol Setabrahmana was praised by the judge as “a first class musician” with “good control over his scores and very solid technique”. He has recently been appointed as the Director of Bands at the College of Music, Mahidol University, where he currently serves as the conductor of Mahidol Wind Symphony.

Dr. Setabrahmana is a conductor whose experience and expertise cover a broad range of repertoire including orchestral, wind ensemble, operatic, choral, and contemporary music. He has conducted and led ensembles in performance in a number of different countries such as the Czech Republic, France, Romania, Spain, Thailand, and the United States. Through several international conducting masterclasses, competitions, and guest conducting invitation; he had the privilege to conduct prestigious ensembles such as the Bohuslav Martinů Philharmonic Orchestra, the Chamber Philharmonic of Catalonia, the “Mihail Jora” Philharmonic Orchestra of Bacau, the Gwinett Chamber Orchestra, the members of West Virginia Symphony Orchestra, the Café Momus Contemporary Ensemble, and the Eastman Wind Ensemble.

Prior to his recent appointment, Setabrahmana held the position of an assistant conductor of the Cincinnati Youth Wind Ensemble. He was also on the faculty of the University of Cincinnti College-Conservatory of Music (CCM) Preparatory Division, teaching conducting and musicianship. During his studies in the United States, he served as a doctoral conducting associate for CCM Wind Studies and a graduate assistant conductor of the New England Conservatory (NEC) Wind Ensembles. He regularly conducted the CCM Wind Orchestra, Chamber Winds, Chamber Players, Brass Choir, as well as the NEC Wind Ensemble and Jordan Winds. During his undergraduate studies at Mahidol, he was the assistant conductor for Mahidol Symphonic Band, Symphony Orchestra, as well as the music director of Mahidol Young Artists Band.